TAPELOOP TEMPEL: MEMO OF A FIBER 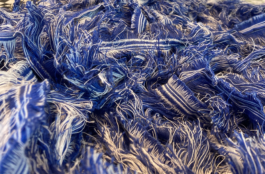 The Tapeloop Temple is an immersive sound installation for single person experience. Elaborating on the simple yet acquainted idea of a temple, the Tape Loop Temple sets the scene for serenity and introspection.

Tapeloop Temple: Memo of a fiber was created on site at the TextielMuseum (Textile Museum) in Tilburg. The working conditions in Tilburg's textile factories at the end of the 19th century left much to be desired. Reference works can be found in the library of the TextielMuseum that talk about horrific accidents resulting in disability and sometimes death. Workers, many of whom were children, worked for a few guilders a week without protection behind heavy machinery, in dangerous fumes or in poor working postures. On November 8, 1901, the Tilburgsche Courant writes of an accident at the Franken Brothers woolen fabric factory of 'a careful young man, living on the Hasseltstraat.' The young Johannes Cornelis Reijnen is caught with the slip of his smock between a drive shaft “with the sad result that the unfortunate boy was thrown around, broke arms and legs and, moreover, was severely bruised internally.” Kees succumbs to his injuries the next day.

The abuses in the textile industry were brought to light in 1887 in a parliamentary inquiry that examined the operation of the Children's Act-Van Houten (forbidding child labor nationwide). During the Tilburg interrogations, discussions were held with the mayor, the chief police officer, a school overseer, a pastor, foremen and board members of various woolen fabric factories. Not a single worker was interrogated. In the official final report, the survey concludes that there has been no mention of child labor under the age of twelve in Tilburg thanks to the work of the Catholic Church, but the traces of child labor can be found in the writings of that time.

Tapeloop Temple: Memo of a Fiber is a documentary installation that has its origin in the sounds of the old textile machines. New analog recordings of the machines in the TextielMuseum have been edited and transformed into a new composition. Tape, like textiles, is a tactile object that can be manipulated. An ode to the textile workers then and now.

Tapeloop Temple: Memo of a fiber was created as part of the City Composership by Mathijs Leeuwis. The City Composer is an initiative of De Link Tilburg

Thanks to
TextielMuseum & De Link